We are pleased to announce LMMI's next Visiting Scholar (2021-22), Dr Alan MacEachern, who will take part in our 15th Biennial Conference in 2022, L.M. Montgomery and Re-Vision!

Alan is a professor of History at the University of Western Ontario. He has published extensively in environmental history, the study of the relationship between humans and nature through time. He is the editor of the Canadian History & Environment series at University of Calgary Press and has co-written/edited textbooks on environmental history methodology and on Canada’s history. He has also written about the role of Green Gables in the history of Prince Edward Island, in Natural Selections: National Parks in Atlantic Canada and in a just-submitted book manuscript co-written with Edward MacDonald, “The Summer Trade: A History of Tourism on Prince Edward Island.” Alan’s latest book, released this month, is The Miramichi Fire: A History. 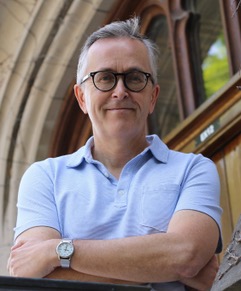 Alan MacEachern (AM): I grew up on Prince Edward Island, and can’t really remember a time I didn’t know her work. When I was very young, a Japanese film crew filmed an Anne scene at the bottom of our lane. When I was a little older, I guided bus tours around the Island, and visited Green Gables and watched the Anne musical countless times. As much as I respect Montgomery’s work, I suppose I would say that as a historian I am particularly drawn to the historical Montgomery – what she and her work have done in shaping the Island’s development over the past century.

2. Do you have a favourite L.M. Montgomery book? If so, what is it and why?

AM: Anne of Green Gables. The story is so simple, so pure, so memorable. And because it’s the first in the series, and the first of Montgomery’s – I won’t argue whether it’s the best – it’s the one that has offered so many interpretations. (I’m not even sure “interpretations” is the right word, given that most versions I’ve seen, perhaps with the exception of Anne with an E, rely as much on familiarity, on honoring the original, as on difference. “Tributes,” maybe?) Also, Anne of Green Gables is the Montgomery book that’s imprinted on my mind when I visit Green Gables, Cavendish, or the North Shore of PEI. I expect I’m not the only one.

3. What is the nature of your research on L.M. Montgomery?

AM: I’m writing a history based largely on Myrtle Webb’s 1924-54 diary. Myrtle was L.M.’s cousin and from 1909 on, she and husband Ernest raised a family in the house that has become known as Green Gables. In the early ‘20s, the Webbs started taking in tourists – benefiting from and contributing to the fact that Green Gables and Cavendish was becoming a destination for literary pilgrims. The Webbs sold Green Gables to become part of the new Prince Edward Island National Park in 1936, but continued living in the house – until the end of 1945, when on short notice they were told to leave. Myrtle and Ernest moved just down the road until their deaths.

But it’s more than that. In terms of Montgomery and her work, Myrtle’s diary is useful in showing how the growing celebrity of the house and the community, and the attracting of tourists to them, didn’t just happen – the Webbs and even the author herself helped make them happen, outside the pages of the books.

4. Ice Cream or Cordial? Both?

AM: Seriously, is anything more delectable than ice cream? I mean, even the most respectable eat ice cream.

5. What are you most excited about being the LMMI’s Visiting Scholar and what do you hope to accomplish?

AM: I’m most excited to learn from the LMMI community of scholars both on the Island and beyond. I’m excited about how their wealth of knowledge – of Montgomery, of her work – can make my book on the Webb diary richer. And I hope to give back: much of my scholarship has been on the history of tourism, of national parks, and of rural life and resource use in PEI and Canada, and that expertise might be of value to some LMMI scholars. And I hope to be useful to UPEI – my alma mater and the foundation of my scholarly career.