Launch of the MaudCast: The Podcast of the L.M. Montgomery Institute

L.M. Montgomery and the Podcast Age 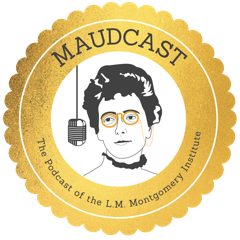 During WWI, the radio was a piece of technology used only in war and industry. Word of mouth, letters, and the daily papers were the only ways that people at home could connect to the global moment—as we see in L.M. Montgomery's Rilla of Ingleside, where the Blythe's kitchen becomes a war room with maps and news clippings and dispatches from Prince Edward Island's rear-guard home action.

Soon after the war, the radio becomes an inviting technology. Montgomery records her initial encounter with the idea of it in her journal entry of Dec 16, 1922. "The papers nowadays are filled with radio,"  Montgomery wrote, talking about how people at home can hear sermons from big American cities. Maud's reaction is quite mixed, admitting that it "is all very wonderful," but also a little depressing. Feeling her age, she admits that these innovative "inventions and discoveries" give her both a sense of weariness and nostalgia. She writes that hte "great flood of discoveries" will define the age, but the technologies themselves cannot make people happier (Selected Journals 3:105).

Nearly a year later, the Montgomery-Macdonalds heard the radio in person for the first time—music in Chicago, IL and a speech in Pittsburgh, PA (150). Maud thought that it was "a very marvelous thing" that "will probably revolutionalize the world in another generation" (Selected Journals 3:150-1). Again, though liking the experience, she admits to feeling unsettled about the idea of the radio.

Montgomery wanted to slow the progress down, keeping the radio out of her books until the '30s and letting the telephone sit at the back of the stories.These technologies are supposed to save time, but Montgomery says that instead, they “only fill it more breathlessly full” (Selected Journals 3:105). As she approaches fifty, Montgomery looks back to the “old ‘90’s with a feeling that they were a nice unhurried leisurely time” in remote, peaceful Cavendish (Journals 3:105). Anne recalls a similar feeling on a phone call to Diana: “I can’t realize that we really have telephones in Avonlea now. It sounds so preposterously up-to-date and modernish for this darling, leisurely old place” (Anne’s House of Dreams 2).

Montgomery was right about the growth of the radio. By WWII, every home had a radio that connected them to the world. Broadcasts defined that war, providing information—and misinformation—and giving comfort and entertainment to anxious and beleaguered citizens. And Maud was right that rapid progress would increase in the coming decades. We have seen stunning technological developments in communication, travel, warfare, engineering, and education.

Finally, if we can tint her looking glass a bit, Montgomery makes an accurate prediction about how we will communicate in the future: “In a generation or two letters will be obsolete. Everyone will talk to absent friends the world over by radio (Journals 3:105). Old-fashioned letter-writing really is a thing of the past in many places in the world and for most people.

And yet, the desire to connect the world over remains. If we can extend Montgomery’s image of “radio” to digital spaces, our Zoom and Skype generation captures something of what she imagined. What Montgomery notes—the way that the airwaves connect absent friends—is one of the things that has made podcasting as an art form grow so rapidly. Blogs continue to grow, there is still a place for print media, and I still want to read a good old-fashioned book. But even in an age with fingertip-ready video content, there is a return to the voice in the podcast world.

It is partly because of this connection that we have decided to launch the MaudCast, a podcast of the L.M. Montgomery Institute. Recognizing Montgomery’s predictions for the future and longing for the past, we want to make good use of the “airwaves” a century after her discovery of the radio. In the MaudCast’s quest to discover innovative scholarship about the life and works of Lucy Maud Montgomery, we welcome to the microphone leading academics, emerging scholars, local researchers, and imaginative readers and writers from around the world.

Our hope for the MaudCast is to bring the best of Montgomery’s created worlds to lovers of her stories throughout the world. In this way, we hope it is a kind of slowing down, a going back and a kind of rest as much as it is a moving forward with the times. Because the airwaves of the 2020s really are, to use Maud’s terms, “marvellous.”

Dr. Brenton Dickieson a Prince Edward Island scholar and the host of the MaudCast. He curates the blog, www.aPilgrimInNarnia.com.