The L.M. Montgomery Conference is now underway and the Social Media Team will be bringing you a summary of events every day. Today's is by Audrey Loiselle. Yesterday, Audrey spoke on "Les belles histoires d'Anne: Can Maud Conquer Québec?". Remember to follow @LMMI_PEI or the hashtag #LMMI2018 for the latest conference news.

The third day of the conference is always a very intense one, though the organisers kindly spared us the agony of having to choose between three concurrent sessions today. At 9:00 am, the participants made their way to 5A. “Reading Montgomery’s Fictional Readers (and Writers)”, in which articulate presenters E. Holly Pike, Balaka Basu and Margaret Reynolds kept us attentive and entertained through an hour and a half of richly-detailed presentations followed by a lively questions period, or to session 5B. “Re-Reading and Writing Past and Future Media,” in which presenters Sarah Galletly, Carolin Sandner and Rebecca J. Thompson delighted the audience with highly visual and interactive presentations.

For more detailed descriptions of the panels and presenters, see the conference schedule here.

After a half-hour break, everyone gathered into the auditorium for the keynote address of Emily Woster, co-chair of the L.M. Montgomery and Reading conference. She was warmly introduced by Laura Robinson, her fellow co-chair, who described her as organiser supreme and Excel spreadsheets expert. In her address entitled “L.M. Montgomery: The Reading of a Lifetime,” Woster, from the University of Minnesota Duluth, shared her preoccupation with exposing how (rather than what) Montgomery read and presented her ambitious project to fully catalogue the author’s reading life. After a short but insightful questions period, the session wrapped up with a standing ovation. 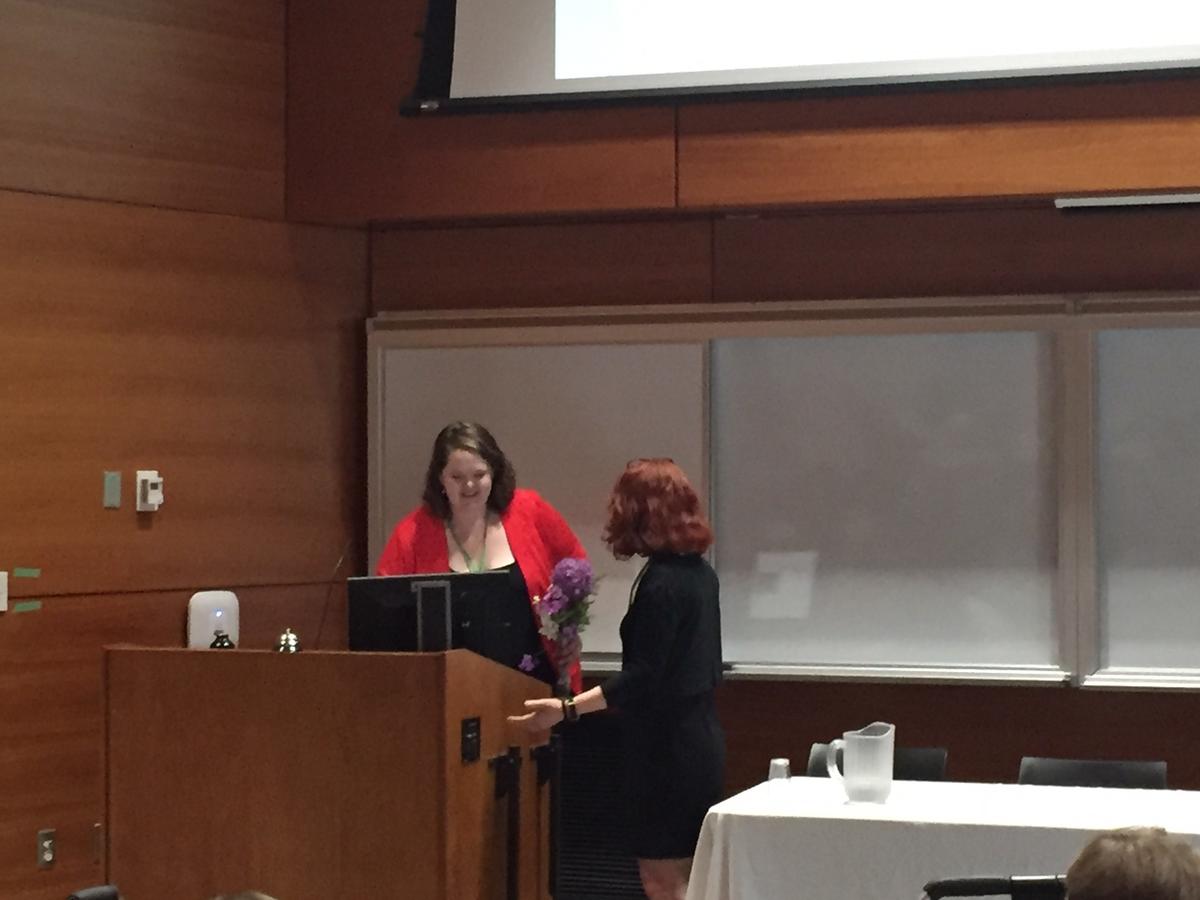 A quick lunch followed, and the participants once again gathered at 1:00 pm for the third plenary session of the conference, entitled “Generations Reading Montgomery”. Chaired by Lesley Clement, it featured speakers Rita Bode, Margaret Steffler & Sally Foreman and Bonny Tulloch, who gave three very distinctive (including one in epistolary form!) presentations enthusiastically received by the audience, who flooded the presenters with questions afterward.

Following the plenary panel were the last concurrent sessions of the day, and participants either headed to 6A. “Reading Adults: Education, Medicine and Law”, during which presenters Anne Willey, Kate Sutherland and Yoshiko Akamatsu gave instructive presentations about medicine, law and adult education as it connects to Montgomery’s life or works, or to 6B. “Reading Montgomery’s Other Genres and Spirituality”, in which speakers Heather Thomson, Jean Mitchell and Brenton Dickieson shed light on the intellectual, the religious and the spiritual aspects of the topic.

Did we all call it a day then? Of course not! After a refreshing and much needed extended break following some 8 hours of scholarly discussions, participants gathered at 5:30 pm in the Robertson Library for the pre-banquet celebration, during which Kristie Collins animatedly described the projected creation of an Anne of Green Gables Studies Center at Reitaku University in Japan, and Lois Fraser pleaded persuasively for the audience’s involvement in the restoration project of L.M. Montgomery’s property in Norval, Ontario. Simon Lloyd then gave thanks and homage to the numerous donors for many Montgomery-related projects.

The evening began with cocktails and hors d’oeuvres in the Dining Hall, before the official start of the much awaited banquet, a highlight of every conference. After a short allocution by the Lieutenant-Governor of PEI, scholars and fans enjoyed a delicious supper of pork or salmon, complemented by PEI chowder and oysters. In honour of the 25th Anniversary of the Institute, Dr. Philip Smith, chair of UPEI, presented a first Legacy Award to Dr. Elizabeth Waterston and Dr. Mary Henley Rubio, and a second one to Jennie Moore Macneill and John Ernest Macneill. The audience was then treated to a dramatic reading of Anne’s outburst and apology to Rachel Lynde scenes, performed with flair by Caroline Jones, Melanie Fishbane, Kate Sutherland and E. Holly Pike. Two more awards were then presented: the Rev. Dr. Francis W.P. Bolger went to George Campbell and the LMM Birthplace Trust, and the Dr. Elizabeth Rollins Epperly Award for Outstanding Early Paper by a student or scholar who graduated less than 3 years ago went to Bonnie Tulloch for her exceptional presentation “Canadian “Anne-girl[s]: Literary Descendants of Montgomery’s Redheaded Heroine”. Then came the moment everybody was waiting for: the announcement of the new LMMI visiting scholar and of the theme for the next LMMI conference, which will take place June 25th-28th 2018. 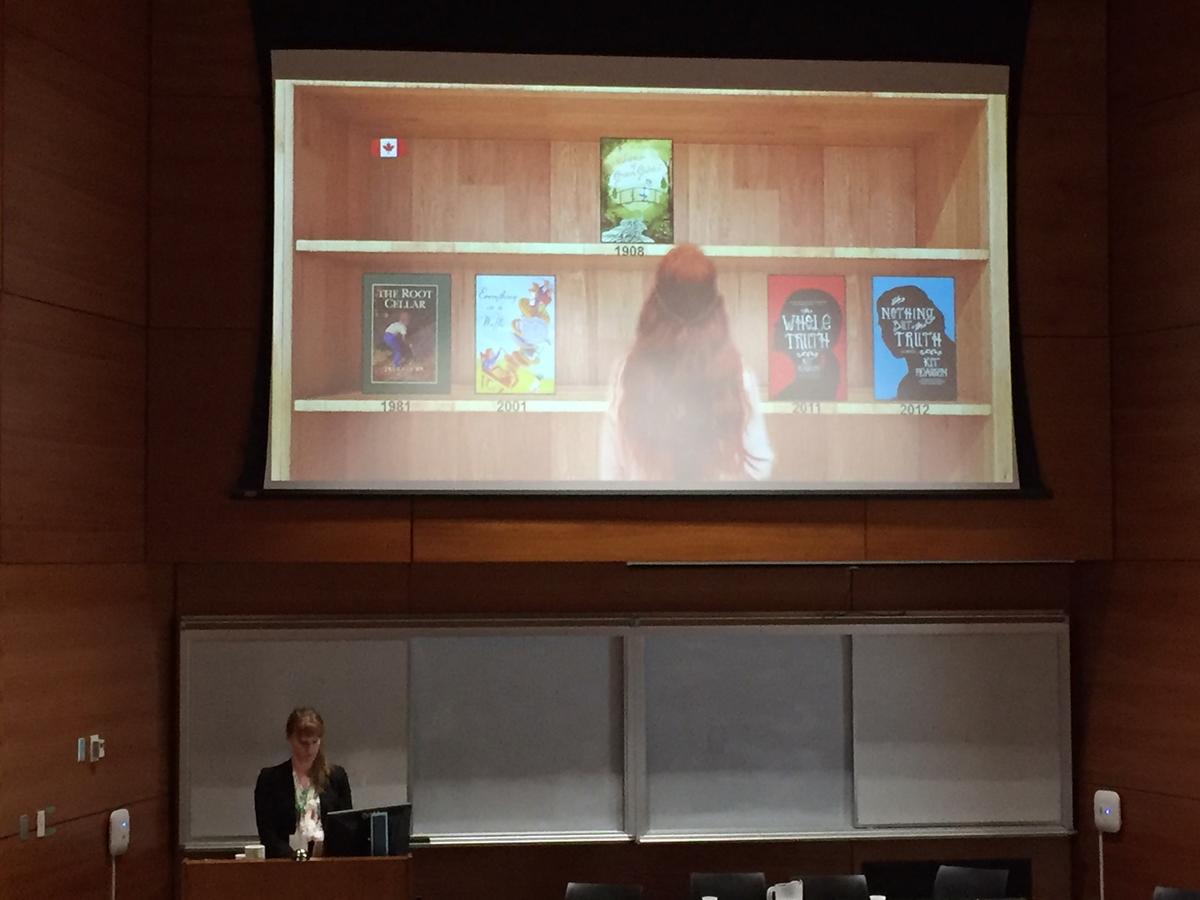 …which is L.M. Montgomery and Vision! Are you feeling inspired already?

Be sure to follow us on social media with the hashtag #LMMI2018.