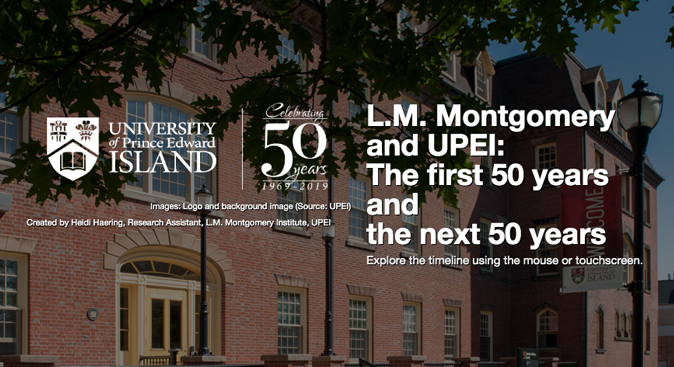 Fifty years ago, Prince of Wales College (PWC) amalgamated with St. Dunstan’s University to form the University of Prince Edward Island. Although L.M. Montgomery is linked to UPEI through her time at PWC, her connection with the university did not end in 1894.

Thanks to Dr. Elizabeth (Betsy) Epperly and Dr. Francis William Pius Bolger and their work while at UPEI, L.M. Montgomery, the woman and author, beyond Anne of Green Gables, was rediscovered through newly uncovered personal correspondence, first through letters to her cousin in The Years Before “Anne” and then again in My Dear Mr. M: Letters to G.B. MacMillan from L.M. Montgomery. These glimpses into Montgomery’s personal life presented a new take on the author, one that separated Anne from her author. This new research was a vivid part of a growing wave of interest in women's literature and work that eventually lead to Dr. Mary Rubio's and Dr. Elizabeth Waterston's publication of Montgomery's Selected Journals, and in 1992 to the first full-length critical study of all Montgomery's novels, Epperly's The Fragrance of Sweet-Grass.

The ‘90s were a fruitful decade for Montgomery and UPEI, with Epperly’s launch of the L.M. Montgomery Institute (LMMI) at UPEI and its first biennial conference, L.M. Montgomery and Her Works, as well as multiple exhibits, including a travelling exhibition “The Visual Imagination of L.M. Montgomery,” and an essay collection, L.M. Montgomery and Canadian Culture, edited by Dr. Irene Gammel and Dr. Elizabeth Epperly. An award-winning CD-ROM, The Bend in the Road, signalled a new millennium’s capacity for sharing Montgomery’s legacy in new ways. It hinted at the technological changes in store, which Montgomery herself, with her interests in her own period’s technologies like photography, may have happily embraced.

See for yourself by visiting the L.M. Montgomery and UPEI 50th timeline.