The Anne of Green Gables Read-a-long this week continues with children's literature scholar, Balaka Basu. Basu will be speaking at this year's L.M. Montgomery and Reading Conference on “Emily Reads Imagined Libraries in the Novels of L. M. Montgomery.” Today, she'll be writing on, "Chapter XXXIII: The Hotel Concert."

I blush to confess it, but this is one of my favorite chapters of Anne of Green Gablesand (it has to be said!) it’s because of the clothes. After “Matthew Insists on Puffed Sleeves” and the splendors of Anne’s brown gloria (that’s a glossy satin-ish fabric woven with silk and wool, in case you were ever curious!), Marilla has had to give in and let Anne rejoice in pretty fashionable-ness and though she’s characteristically undemonstrative, you can tell she’s enjoying it more than not.

Diana has come to Green Gables to help Anne dress for the concert; she rejects Anne’s choice of a stiff blue-flowered muslin in favor of a white organdy, wanting Anne to look natural, as if the “dress grew on [her].” And although Diana doesn’t know what Anne has chosen to recite, the white dress does seem to be a more suitable costume for Anne’s tragic selection, The Maiden’s Vow, a poem in which two lovers part forever in a forest where “mystic white vision[s] in the moonlight do gleam.” While this is not how I imagined Anne’s “clinging organdy” when I first read the novel, the dress below is correct for the period (it even has puffed sleeves!) – we just have to imagine it against her “titian” red hair. 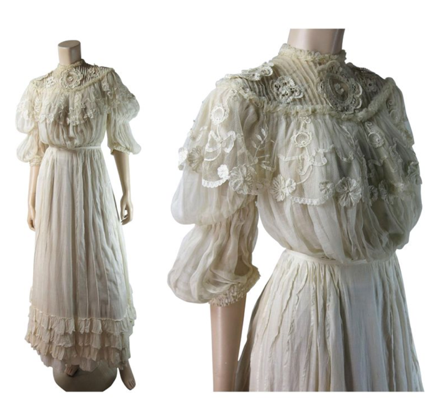 “The Hotel Concert” is one of the transitional chapters in the novel as Anne moves from the childhood of primary school into “young lady-hood,” and it’s marked by Anne’s first public performance outside of her small village community of Avonlea. Escorted to the White Sands Hotel by Diana, Jane, and Jane’s brother Billy (whose admiration for Anne knows no bounds, but also prevents him from ever talking to her), Anne is taking her first steps into a wider world peopled by professional performers and ladies in white lace or pink dresses and diamonds.

While Anne’s ambitions end up being more literary than theatrical, her enraptured delight at first watching and then participating in school concerts and Christmas shows never fails to remind me of seeing and eventually working on plays myself: the heart palpitations of shivering anticipation before the curtain; the thrill of working to enchant a crowd; and the heady rush of applause. The magic of theater is never lost on Anne; she is always carried away by it and that makes me love her all the more. Her dramatic ability to make others feel withher continues through the series, and it’s one of her most attractive qualities.

Thanks to what she reads as Gilbert’s victorious smile at her very first agonizing bout of stage fright (he’s actually just impressed with the sight of her pale organdy against the potted palm trees; good choice, Diana!), Anne’s indomitable fighting spirit allows her to carry on with her recitation of “The Maiden’s Vow,” moving the audience with her “clear, sweet voice […] without a tremor or a break.” Before the days of the radio, this kind of artful “speaking” was essential to a successful entertainment and it is Anne’s particular talent: elocution or reciting aloud. Anne shares this gift with a number of Montgomery’s other heroines, which is unsurprising considering that Montgomery was herself a noted elocutionist and also because in the Victorian and Edwardian periods, this art was mainly the province of women and young people. Elocution fell out of fashion after World War I, at least partially as a reaction to its status as a woman’s profession.

This glimpse of fashionable life and high society might make most teenagers—like Jane—yearn for something outside their ordinary round, but Anne’s devotion to Green Gables and to Matthew and Marilla can’t be shaken: she’d rather be their girl than have all the diamonds in the world.

Balaka Basu is assistant professor of children’s literature and the digital humanities at the University of North Carolina at Charlotte. She met Anne when she was about 8 years old and they have been bosom friends ever since.