Anne of Green Gables Read-a-long: Chapter XXXII: The Pass List is Out

The Anne of Green Gables Read-a-long continues with Sarah Galletly's response to "Chapter XXXII: The Past List is Out."  A Roderick postdoctoral research fellow at James Cook University in Australia, Galletly will be speaking at the upcoming L.M. Montgomery and Reading conference in June on "Reading Across the Page: The Periodical Origins of L.M. Montgomery's Short Fiction."

I don’t think I’ve ever met someone who actually enjoys exams. Much like Anne, I grew up dreading them and found the period waiting for the results almost as awful as the exams themselves. We as readers gain a palpable sense of Anne’s anxiety throughout this chapter, even if in the back of our minds we’re pretty sure she’ll come out on top in the end.

As a researcher heavily invested in the materiality of texts, I adore how much this chapter revolves around letters and newspapers, and the time lag associated with the transportation of these textual objects to remote rural locales. In our increasingly impatient age, where digital technologies make us feel more connected than ever, this chapter takes us back to a time where there was no other option than to “haun[t] the post office” for news from our closest friends, or wait impatiently for announcements in the newspaper that could change the course of our lives. Although this situation remains a reality in some parts of the world, an extra level of nostalgia and romance resonates in such scenes for many of us today. 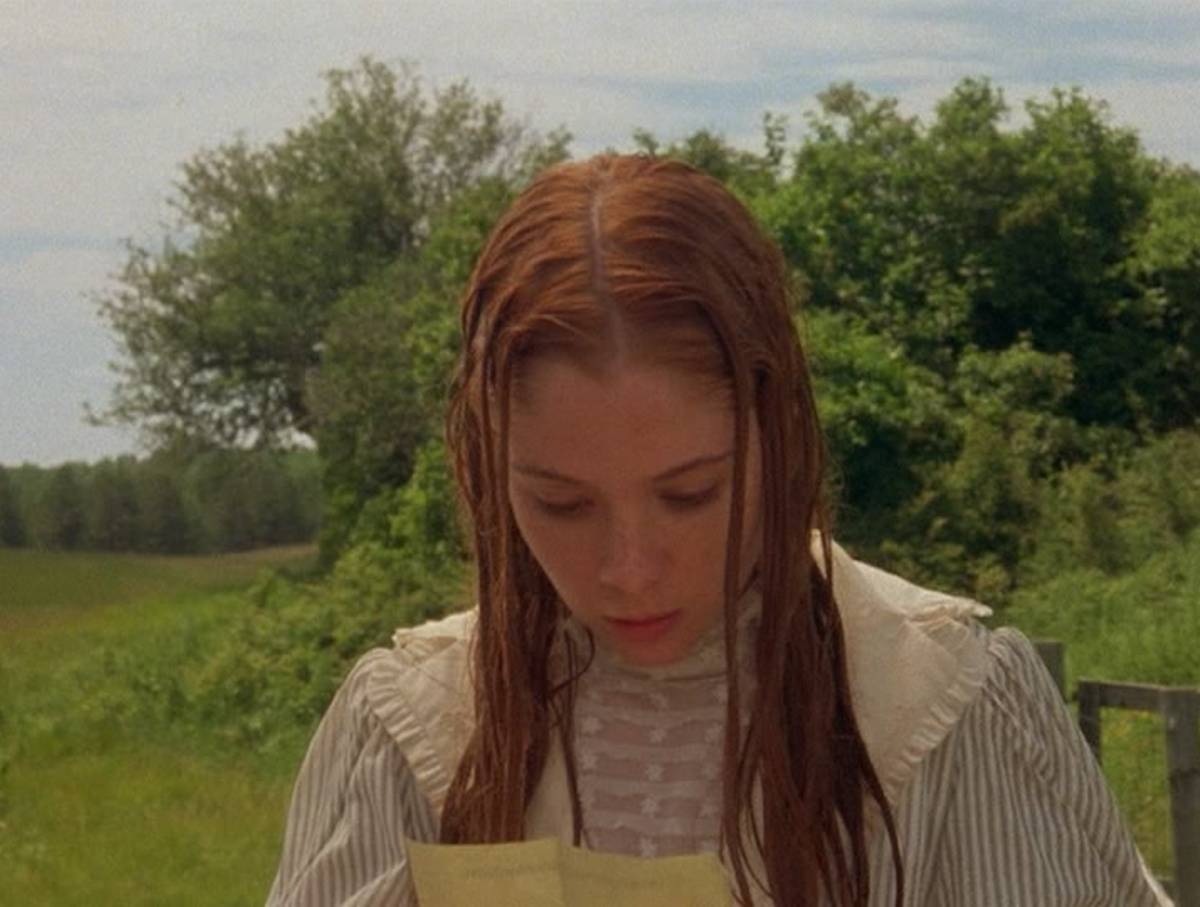 In preparing to write this blog post, I took the opportunity to revisit a few different Anne of Green Gables adaptations to consider how they approached this particular chapter. As die-hard fans of the Sullivan adaptation will recall, Anne of Green Gables (1985) condenses this chapter quite dramatically, inserting the events of “An Unfortunate Lily Maid” into the waiting period between the sitting of the Queen’s entrance exams and the announcement of the results. More significantly, the reveal of the rankings is made by Gilbert – shortly after he rescues Anne from the river – rather than by Diana.

While I can see how this suited the more romantic inclinations of that production, I can’t help but feel saddened that Diana’s vital role in this chapter is so dramatically diminished because of this change. The original chapter begins with Anne and Diana bemoaning the loss of Miss Stacy from the Avonlea school, with Diana voicing her fears that “It won’t be a bit the same” without Anne as her desk-mate if she succeeds in getting into Queen’s. Even though she will only be away for four days, Anne also promises that she will write to Diana to let her know how the first day of exams goes, and a substantial portion of this chapter reproduces Anne’s dutiful letter to her bosom friend recounting the anxieties of the first day of examinations. 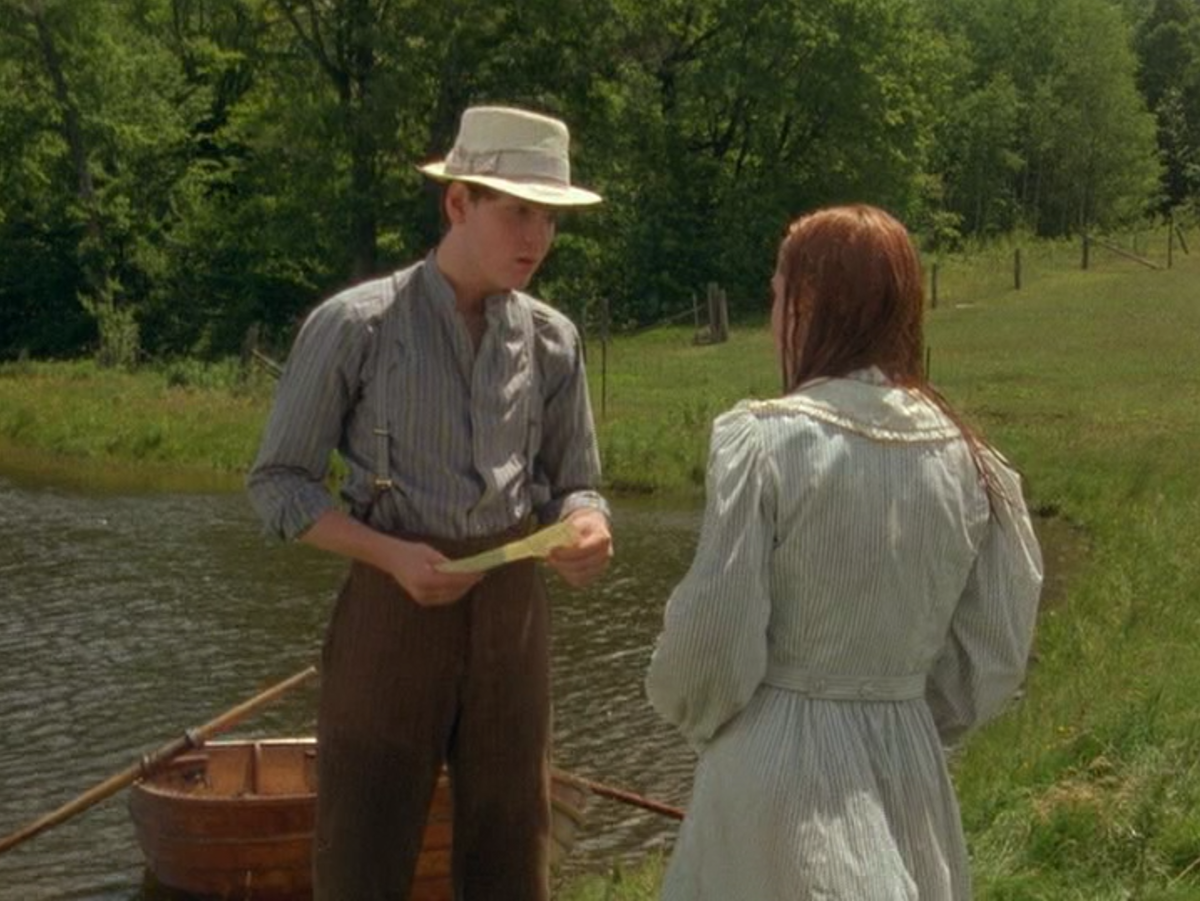 On her return to Avonlea, the narrator is also keen to assure us that “Diana was over at Green Gables when she [Anne] arrived and they met as if they had been parted for years.” When Diana finally learns that the pass list is out, she races over to Green Gables with such determination that she only manages to express that Anne has drawn for first place with Gilbert (“but your name is first”) and that she is “so proud!” before she collapses onto Anne’s bed “utterly breathless and incapable of further speech.” These small moments reinforce the intensity and centrality of female friendships in both Montgomery and Anne’s world and have always stayed with me as a reader.

Notably, in the 1979 Japanese anime adaptation Akage no An,these scenes with Diana are all retained, the content of this specific chapter taking place across two separate episodes (38: “My Number is 13” and 39: “The Results”). This is perhaps not surprising given this production takes over 20 hours (across 50 episodes) to explore the narrative of Anne of Green Gables. Nevertheless, the extra breathing room this adaptation encourages allows us to see more of Anne before she heads to Queen’s, with a special focus on the anxiety she feels around her exam number: “I am not superstitious and I know it can make no difference. But still I wish it wasn’t thirteen.” 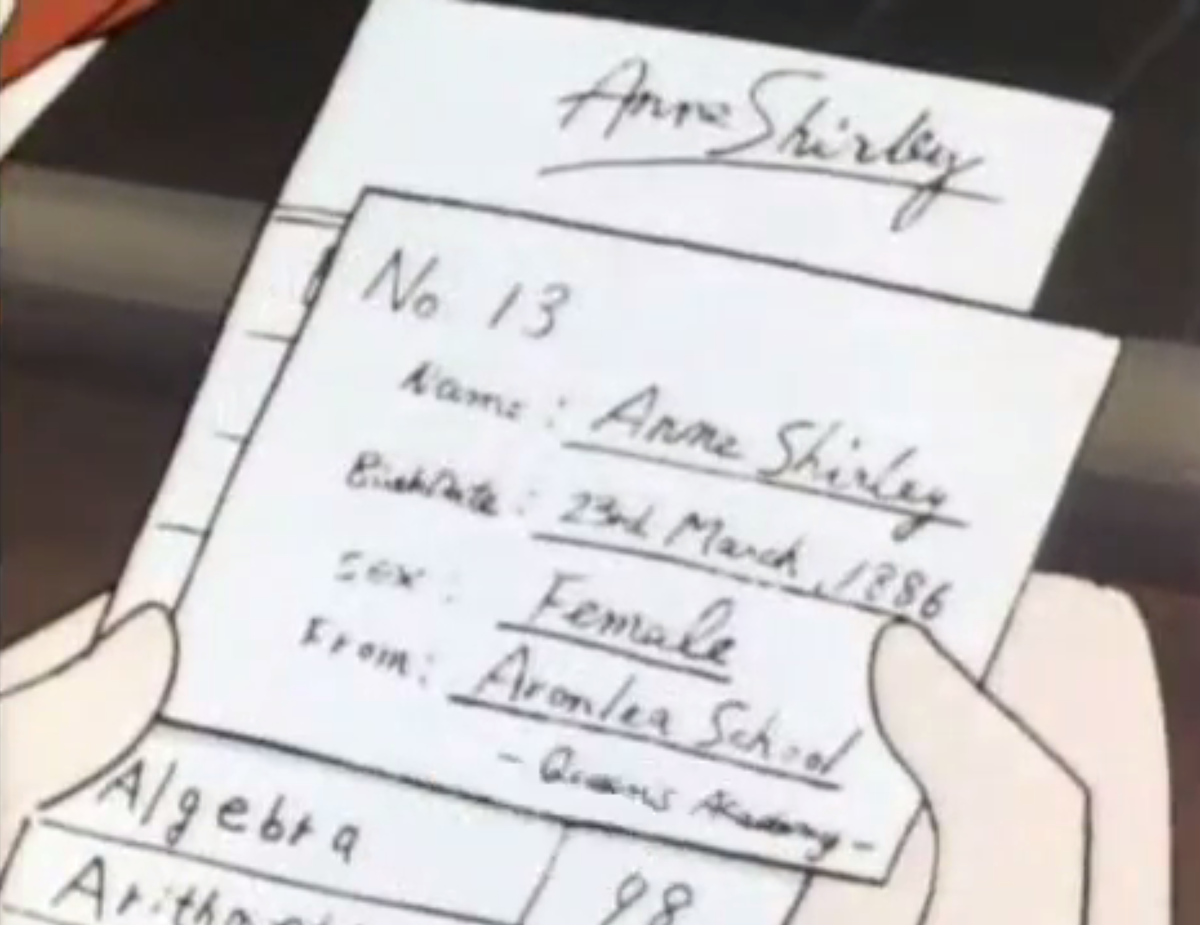 I was particularly taken by a scene in episode 39 of this adaptation where Marilla allows Anne to work with Jerry and Matthew out in the fields. In this version, Anne’s previous requests to join their farm labouring have been denied because such work is not considered appropriate for a girl. However, Marilla relents in this instance in the hopes that the exertion will distract Anne from “haunting” the post office to await her results. The plan has its desired effect, leaving Anne so tired at the end of the day she falls asleep fully dressed and without any stresses for the first time in weeks. Such endeavours also enable a beautiful sequence of Anne laying at ease on top of a tall pile of hay in Matthew’s cart – a rare moment of peace and serenity in an otherwise tense and anxious episode. 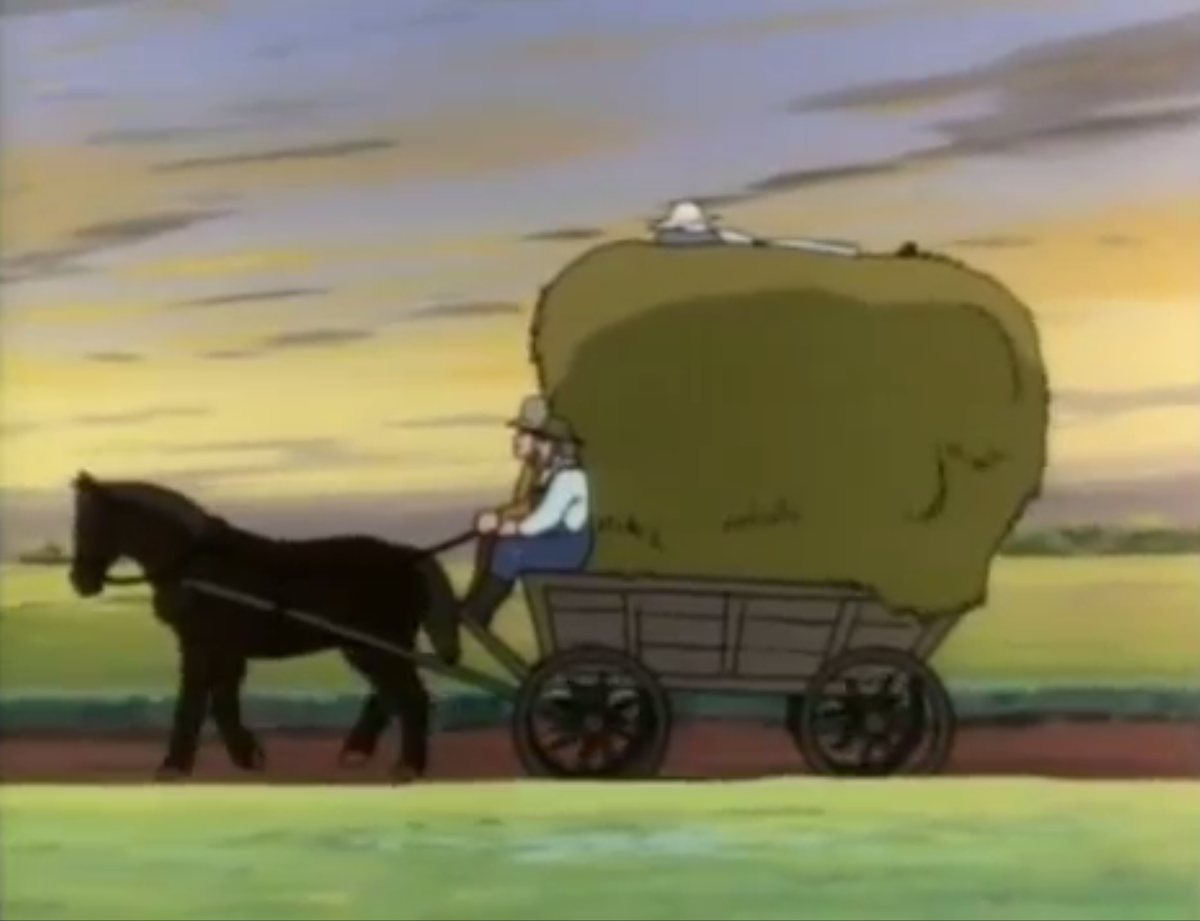 This mirrors the brief moment in Montgomery’s original chapter where Anne sits at her open window “forgetful of the woes of examinations and the cares of the world, as she drank in the beauty of the summer dusk.” Yet, I can’t help but wish Anne had also experienced the brief moment of respite offered by this languorous journey home on the hay cart, as surely we all need as many distractions as possible during those moments when we all we can do is wait… and wait… 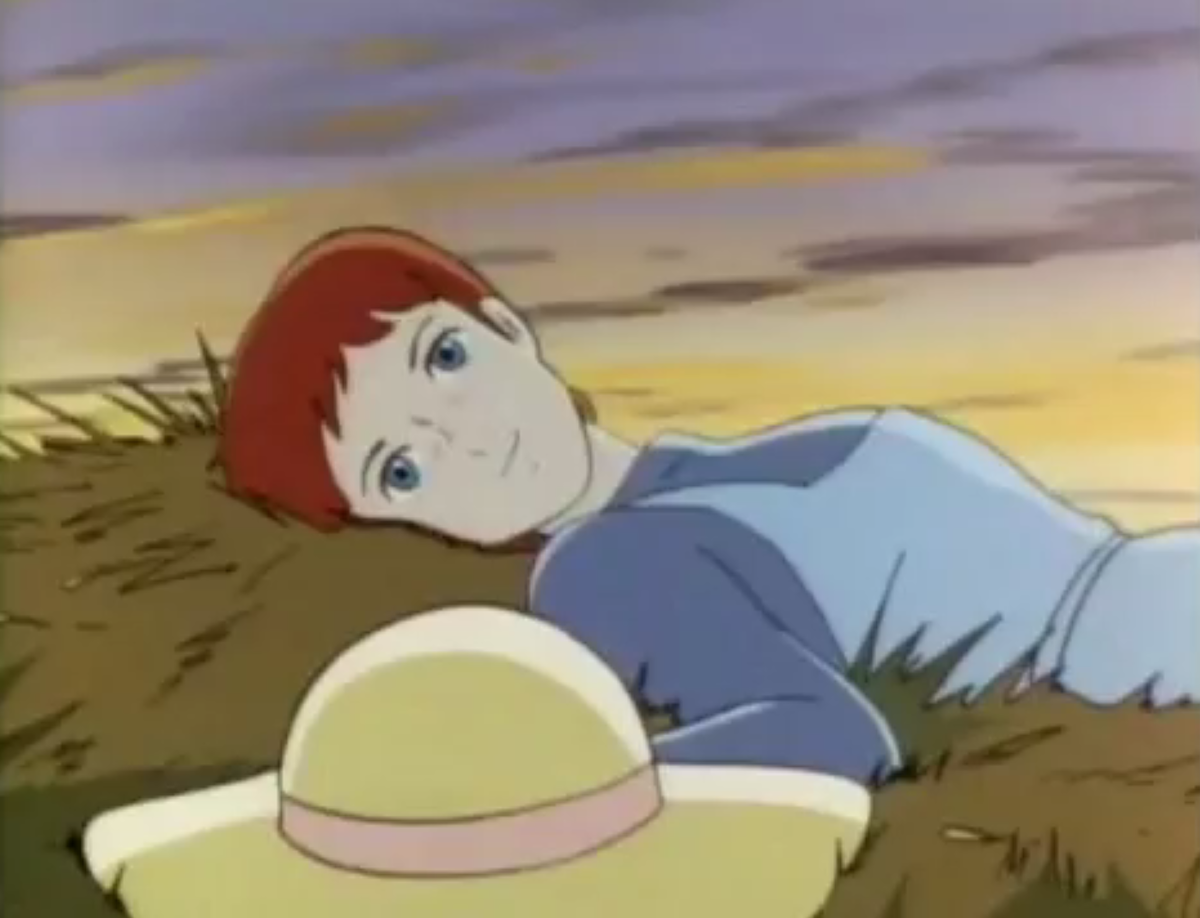 Images screencapped from Anne of Green Gables(1985) and Akage no An(1979). All rights reserved.

Sarah Galletly (@s_galletly) is the Roderick postdoctoral research fellow at James Cook University, Australia. Part of her doctoral thesis explored the role of Anne as a teacher (in all senses of the word) in Anne of Avonlea, and her current research focuses on L.M. Montgomery’s short fiction and representations of her celebrity in early twentieth century print cultures.